Ernesto Delgado’s lifelong love of the flavors of México and the magic that occurs when food and fire are combined began as a small boy living in Atacheo, located in the state of Michoacán.

The family moved to Cloverdale, California, when Ernesto was only 5 years old. In those years, Cloverdale was a small, close-knit community of less than 3,000.

In her sunny kitchen, Ernesto’s mother Elvira created joy. Her love of family and food were intertwined with her love of nature. Wherever she went, it was as if she made the colors of life more vivid; the music brighter. Her garden overflowed with the goodness of fresh tomatoes, squash, peppers and flowers– all of which she artfully combined into delicious and original recipes. She gave her children the gift of a reverence for food – how it’s grown, harvested and combined into dishes that transcend the ingredients. Elvira knew that food was the thread that holds families together, and she celebrated her family every day. Ernesto, his sister Berta and brother Leopoldo spent hours in their Mother’s kitchen, watching her cook and tasting tidbits of food.

Growing Up – Influences that Shaped a Restaurateur

At the age of fourteen, Ernesto had his first of many jobs in a restaurant. The love of food and all it represents made him decide at sixteen that he wanted to own a Mexican restaurant. In love with art, culture and regional food, it seemed to embody a place he would be free to create beauty in food and atmosphere. This dream, like many are for teenagers, had to be postponed.

It was at this time that Ernesto, now living in Napa with his family, had a teacher who would have a lasting and profound effect on his character. This man taught the Carpentry class at Napa High School. More than carpentry, the man taught his students that honesty, integrity and character meant everything in life. Dave approached each project with his students as a quest for excellence– in practice and in character – his teachings shaped the man Ernesto is today.

A love of architecture and design led Ernesto to enroll in Sacramento State College’s Design program. Graphic Design professor Gwen Amos taught him the importance of truly seeing and appreciating the detail in everything around him – from the smallest leaf in nature to the texture in the bark of an ancient oak. She encouraged him to remain curious about the world and all it has to offer. While he was learning about the design components of creating brand identity in this class, he had the opportunity to work with some local restaurants as clients. He quickly realized he could combine his greatest passions; design and a love of art and architecture, the culture and food of México and the fascinating, complex details of entrepreneurship. A Restaurateur was born.

In fact, it is Ernesto’s design background which has given him a unique approach to problem solving. He lives to build and create – whether it’s the design of a building, or the launching of a business – he is driven by a calling to make the world a better place by adding beauty and unforgettable experiences to everyday life. 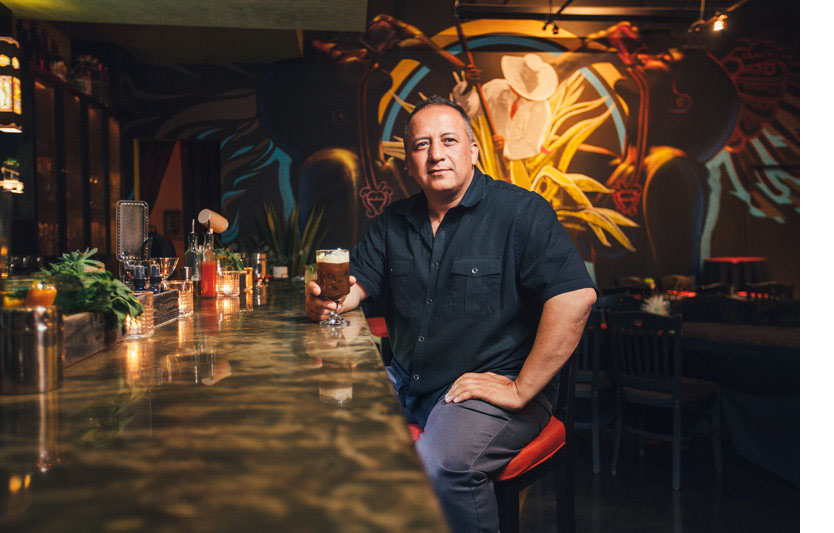 Beginning life as a Restaurateur was not without its challenges. Ernesto began by assisting in the planning, concept and opening of Zocalo (a Mexican restaurant in Downtown Sacramento) and immersed himself in the building and design process. He considers it an achievement of which he’s proud, although he accomplished the work as an employee and could not get credit for his efforts. This was followed by El Patron, which he opened with a business partner. The restaurant was a huge success, but suffered from basic philosophical differences between the partners. It was a difficult passage, during which he severed his relationship with his business partner and at the same time went through a heartbreaking divorce.

During the darkest days, which might have made a less driven man give up, Ernesto began the process to open Mayahuel. Undaunted by setbacks, he truly believes that every roadblock in business brings a new opportunity for success. He raised capital and demonstrated to the property owner and investors that he was worth the risk. He found the current space, which belonged to three separate businesses – a restaurant, eyeglass store and cell phone store. The vacant portion was dirty, rundown and piled with debris. The designer in him saw the potential – the space had an ideal location– and he began to transform it into his vision. There were numerous challenges with City Planning, each needing resolution before proceeding to the next step. Mayahuel was two full years in planning before the doors finally opened for the first time.

It was beautiful even without the amazing art which now graces the walls.

Ernesto credits his manager Francisco Medina for helping him overcome the challenges. Francisco’s (see article about Francisco) dedication to the vision of Mayahuel and to Ernesto made it possible to realize the dream. Francisco is a natural problem solver, a man who never accepts defeat, who feels that no matter the challenge, it can be overcome with hard work and a positive attitude.

The Life of a Restaurateur – Passion, Creativity, Attention to Detail, and Perseverance

Today, Ernesto works harder than almost anyone. Driven by his passion to share his culture, his days begin early and end late. If you’ve had the opportunity to observe him in his restaurant, you’ll immediately notice how much his team respects and admires him and loves Mayahuel. Even when he must deal with a challenge, he is always gracious and respectful. His is a culture that takes respect very seriously – in a manner which is both gracious and inclusive. A ‘hands-on’ owner, you will find him involved in all aspects of the restaurant – in the kitchen, meeting with guests, helping to clear tables. He sincerely believes his guests are like family; each is cherished and valued.

Strong ties to the Sacramento community is one of the reasons Ernesto works as hard as he does – he truly believes that bringing something worthwhile and unique to the Downtown area contributes to the betterment of the whole area. He is appreciative and generous with his team and his investors. Ernesto has never forgotten his struggles – and the satisfaction he derives from providing employment for fifty-six people who live in Sacramento is gratifying.

You will see Maya depicted as the young Goddess Mayahuel in one of the murals at the end of the Tequila bar. She is holding an Agave plant in reverence for the transformational power of new life and the elixir of a culture created around the magic of Maguey. ‘Maya’s Kitchen’ is next to this lovely mural – where the bounty of our area is celebrated every day in the food created to honor an ancient culture.

His goals are lofty. At this writing, he’s working hard to open two more restaurants, each with its own unique place in a culture filled with beauty. He is Vice President and board member of the California Restaurant Association, a position that takes him to Washington, D.C. once a year to lobby for issues which affect California Restaurants. He also belongs to a new group – Region Restaurants, which addresses issues of a local nature. Ernesto shares a close professional friendship with the majority of Downtown and Midtown restaurateurs– a respect and camaraderie as a result of their shared vision that Sacramento can showcase some of the finest food in California. His love of architecture, in particular that of Luis Barragan, has enabled him to create canvases to share art with the world – from the detail on a beautifully handmade tequila bottle to sweeping, larger than life murals that tell a story.

What would he like people to know about his culture? Ernesto would love to transform the perspective people have about México and its people. To help them learn that the food has been influenced by many ethnicities and cultures and yet maintains the integrity of indigenous peoples. Mayahuel allows him to share México’s history and the production of fine tequilas in a museum, or gallery style.

He not only aspires to be a truly great restaurateur, he wants to continue to be active in promoting the restaurant industry in the Sacramento region. His spare time is spent studying other successful entrepreneurs and motivational experts such as Les Brown and Eric Thomas. He’s inspired by stories of others who have overcome challenges and emerged successful – his favorites are Howard Schultz (‘Onward, How Starbucks Fought for Its Life without Losing Its Soul’ – Rodale Press) and Joe Bastianich (‘Restaurant Man’ – Viking)

Ernesto not only dreams big; he has the tenacity to pursue those dreams until they become reality. He would love to create a group of restaurants and other businesses that proudly carry his name –with the understanding that his name is equated with outstanding design, top quality food, a unique presence, and an experience like no other.

Ernesto generously shares the art, history, and food of his heritage every day, creating a lovely and memorable experience for his guests. From the moment they walk through the door until they leave, no detail in that experience is missed. He lives by his motto, ‘It’s not only our job to care for our guest, it’s our goal to AMAZE them!’