Some of México’s oldest, finest and most recognized traditional dishes like the chile en nogada not only produces a savory taste of fine spices and decadent sweets on the palette, but also carries along a significant piece of history. 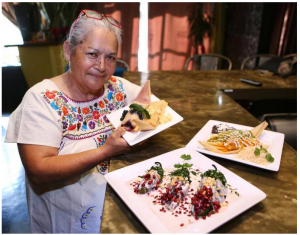 Just ask La Señora Bertha Graciela Medrano Ríos who was born in Michoacán, México and raised in México City acquiring the skills and methods used to prepare some of México’s most renowned dishes.

She was just four years old when she allowed her curiosity to overpower her.

Day in and day out, she watched her mother gather an assortment of fresh herbs, fruits, vegetables and meats to prepare some of México’s most prized meals—and some of the best she has ever tasted. They never quite escaped her memory.

But for 61-year-old Ríos, Mexican food is about experimenting with ingredients and using the senses to identify things that can and usually do, taste good together.

“When I was a young cook, I always thought to myself, what if I mix this ingredient with that? And then I would try it and the result was great. There were always ideas twirling around in my head,” said Ríos.

That’s how she came up with the idea of using not just chiles poblanos with her very special recipe of chile en nogada, but also a jalapeño pepper and un chile de pasilla. Read More…