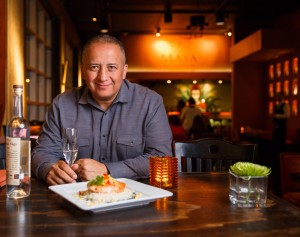 The family moved to Cloverdale, California, when Ernesto was only 5 years old. In those years, Cloverdale was a small, close-knit community of less than 3,000. There was one stoplight in the middle of town.  Nearly all the residents worked at the lumber mill or a vineyard.

In her sunny kitchen, Ernesto’s mother Elvira created joy. Her love of family and cuisine were intertwined with her love of nature. Wherever she went, it was as if she made the colors of life more vivid; the music brighter. Her garden overflowed with the goodness of fresh tomatoes, squash, peppers and flowers– all of which she artfully combined into delicious and original recipes. Her favorite Calla Lilies could be found in her flower garden and on her table. She gave her children the gift of a reverence for food – how it’s grown, harvested and combined into dishes that transcend the ingredients. Elvira knew that food was the thread that holds families together, and she celebrated her family every day. Ernesto, his sister Berta and brother Leopoldo spent hours in their Mother’s kitchen, watching her cook, tasting tidbits of food, and drinking Abuelita (a flavorful Mexican hot chocolate).

At the age of fourteen, Ernesto had his first job of many in a restaurant. The love of food and all it represents made him decide at sixteen that he wanted to own a Taqueria. In love with architecture, art and cuisine, it seemed to embody a place he would be free to create beauty in food and atmosphere. This dream, like many are for teenagers, had to be postponed.

It was at this time that Ernesto, now living in Napa with his family, had a teacher who would have a lasting and profound effect on his character. This man taught the Carpentry class at Napa High School. More than carpentry, the man taught his students that honesty, integrity and character meant everything in life. Dave was a friendly, robust older man with white hair who always wore blue overalls and approached each project with his students as a quest for excellence– in practice and in character.

His love of architecture and design led Ernesto to enroll in Sacramento State College’s Design program. Graphic Design professor Gwen Amos taught him the importance of truly seeing and appreciating the detail in everything around him – from the smallest leaf in nature to the texture in the bark of an ancient oak.  She encouraged him to remain curious about the world and all it has to offer. While he was learning about the design components of a business brochure in this class, he had the opportunity to work with some local restaurants as clients. He quickly realized he could combine his greatest passions; design and a love of art and architecture, the culture and cuisine of México and the fascinating, complex details of entrepreneurship. A Restaurateur was born.

Today, Ernesto works harder than almost anyone. Driven by his passion to share his culture, his days begin early and end late. If you’ve had the opportunity to observe him in his restaurant, you’ll immediately notice how much his team respects and admires him and loves Mayahuel. Even when he must deal with a challenge, he is always gracious and respectful. His is a culture that takes respect very seriously – in a manner which is both gracious and inclusive.

His goals are lofty. At this writing, he’s working hard to open two more restaurants, each with its own unique place in a culture filled with beauty. His love of architecture, in particular that of Luis Barragan has enabled him to create canvases to share art with the world – from the detail on a beautifully handmade tequila bottle to sweeping, larger than life murals that tell a story.

What would he like people to know about his culture? Ernesto would love to transform the perspective people have about México and its people. To help them learn that the cuisine has been influenced by many ethnicities and cultures and yet maintains the integrity of indigenous peoples. Mayahuel allows him to share México’s history and the production of fine tequilas in a museum, or gallery style.

Ernesto generously shares the art, history, and cuisine of his heritage every day, creating a lovely experience for his guests. From the moment they walk through the door until they leave, no detail in that experience is missed.