This is an article I wrote as part of an assignment from one of my professors at the Culinary Institute of America at Greystone. Culinary School is much more than cooking techniques or recipes – it delves deeply into the cultural significance and origins  of ingredients and dishes as well.  ~ Sr. Ernesto Delgado 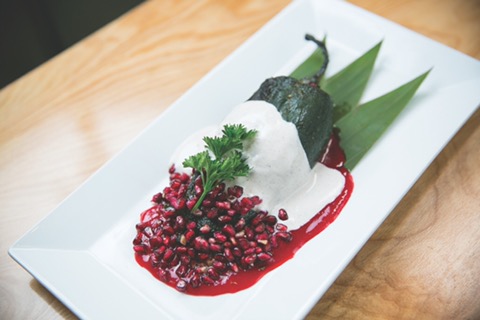 One of my favorite assignments at the CIA thus far has been learning of the ’99 Platillos de Mexico’, a gathering of researchers, Chefs, scholars, and professors who were tasked with defining 100 dishes that tell the story of Mexican cuisine and cookery. They gathered in Mexico City to study, discuss, and debate the iconic and historical foods of the six gastronomical regions in Mexico. These dishes were influenced by Spain, West Indies, and indigenous people of the Caribbean as well as those foods brought by France and the Middle East. These earnest and learned foodies finally published their much-debated list. It came as no surprise to me that my beloved Chiles en Nogada was second on the list.

The Chile en Nogada is an historic and iconic dish of Mexico; representing the Nation’s diverse and complex gastronomy.

I am fascinated by this dish! Perhaps it’s the uniqueness of the dish that’s everything we don’t expect it to be. A dish that rivals any classic and contemporary dish of today. The recipe puzzles Chefs and seems foreign when compared to the foods we know. A dish that is seasonal and holds the pride of a nation. Vibrant and colorful, with the bright red, white and green of the Mexican flag, it truly represents the premise that mixing colors in a dish adds nutritional value.

“Let food be thy medicine, and medicine by thy food” ~ Hippocrates, 400 BC. I think Hippocrates would have loved the Chile en Nogada. A dish that contains beauty, history and provides every food group the human body needs to be strong and healthy.

The Nogada began as a tribute to honor Agustín de Iturbide, a revered military commander who fought in Mexico’s War of Independence and later became emperor of Mexico for a short time. In August of 1821, Iturbe signed the Treaty of Cordoba in the town of Veracruz, which granted Mexico independence from Spain. He then traveled across the country to celebrate the victory, stopping in Puebla on the way to Mexico City.

Such great news traveled fast even in 1821. The townspeople planned a grand festival and feast in General Iturbide’s honor. The Augustinian nuns of the Santa Monica convent were tasked with preparing a new dish to show Puebla’s appreciation. It is said that the nuns labored for many days to create the perfect dish in the hope that the General would taste it and give his approval.

Using ingredients readily available in Puebla, they decided to create a dish that represented the pride of the Mexican people, and their gratitude to General Iturbide. The nuns used the best of the late season harvest in the dish, including poblano chiles, peaches, pears, apples and walnuts grown in farms near Puebla.

General Iturbide was careful about food. He feared being poisoned by fanatics who still supported the Spanish. Many dishes were offered the day he arrived. Legend holds that he was so enamored by the beauty of the dish, he was unable to resist the offering made by the nuns.

The original dish was stuffed, battered and fried, and significantly heartier than the versions of today. The modern version uses fresh poblanos which are fried until lightly cooked, then peeled, stuffed, and topped with creamy walnut sauce and fresh pomegranate seeds. The stuffing varies, but typically includes pork, beef, peaches, pears, raisins, apples and walnuts.

This seasonal dish is made in September when walnuts known as ‘Nuez de Castilla’, grown in the state of Puebla are still fresh and white in color. Harvested while tender allows you to peel the outer shell giving a very subtle and distinctive flavor. After the walnuts are peeled, they’re soaked in milk to soften and give them a creamy texture. They are then gently crushed by hand to release their flavor while staying slightly crunchy. This is one key element of the original recipe that cooks and chefs of today skip, yet that’s what imparts the delicately flavored sauce the original Nogada recipe calls for.

Perhaps it’s the beauty of the fresh Poblano Chile that fascinates me. The Poblano Chile originated in Puebla, Mexico, a region in the heart of the country. It is said to have grown wild in the mountainous areas near Puebla – quite possibly in Cholula, which is thought to be the oldest continuously inhabited city in Mexico.

Cholula was first settled by indigenous people between 800 and 200 BC.  By 100 BC, the Olmecs had made Cholula one of Mexico’s most active cities. Predating the Aztec civilization, the Olmecs are considered to be one of the earliest great civilizations in Mesoamerica.

Have you ever taken a moment to admire the beauty of a fresh poblano pepper? In its freshness it has a masculine bold presentation with dark green glistening skin. Its shine holds the oils of the spice it contains. Its curves and shadows give it an organic and unmistakable tie to Nature. Every time I see one, I want to paint it like a Picasso. It pains me for a moment to throw it onto the grill and the open flame, yet I love the smokey fresh and spicy scent as it reaches my nose while it blisters and crackles under fire. This scent has hypnotized me. The creations with this pepper are endless. Just two favorites are Crema de Chile Poblano soup, and Rajas de Chile Poblano – a side dish to the flavorful Arrachera Steak containing a mixture of roasted poblano strips sautéed with onions and roasted corn. Thinking about this makes my mouth water.

To realize that this complex dish was created by nuns in Puebla in 1821 is astonishing. The recipe has stood the test of time and still holds true to its original concept. The oldest known recipe in print is one found by Chef Ricardo Muñoz Zurita, known as the ‘anthropologist of Mexican cuisine’. According to Chef Muñoz Zurita, the earliest recipe was found in “La tipica cocina poblana y los guisos de sus religiosas” (Traditional cuisine of Puebla and the dishes of its nuns) by Melitón Salazar Monroy, published in 1946. A copy of this book can be found in the UC Davis library.

Chef Zurita, Executive Chef of the Azul restaurants in Mexico City is author of  “Diccionario Enciclopédico de la Gastronomía Mexicana” – the Encyclopedia of Mexican Gastronomy. Other than the elimination of the battering and frying of the stuffed Poblano, he feels the original ingredients are still superior. In an interview with the New York Times, he said “The sweet, salty, and sour tastes of the fruit, chiles and meat combine to create a very complex and delicious dish”.

This dish is a symbol of pride for the people of México and specifically the people of Puebla. Make it incorrectly and México will let you know it’s not right. I was amazed to read the negative comments from people in Puebla (as well as other regions of Mexico) to Culinary school Chef-Instructor and very well-regarded Chef Iliana de la Vega.  She shared a video demonstrating how to prepare Chiles en Nogada. In the video entitled ‘Chiles en Nogada with the World’s Premier Culinary College’ this Chef, whom I greatly admire, shared her version. Mexico didn’t like it. The people are proud of their history and cuisine, especially a dish so tied to hard-won battles against the seemingly insurmountable enemy of Spain. As a Chef, I think they failed to recognize the idea that cooking is about honoring and respecting history and tradition while adding your personal identity to your cooking.

Every September I love showcasing this dish in my restaurants. I was proud to feature a Chile en Nogada at the 2017 Sacramento’s Farm to Fork Festival where I also featured a 100% plant- based version of this dish with oyster mushrooms as a vegan option.